While the Supreme Court never ruled against the incarceration of Japanese-Americans, many Constitutional Rights were breached.

"Congress shall make no law respecting an establishment of religion, or prohibiting the free
exercise thereof; or abridging the freedom of speech, or of the press; or the right of the people peaceably to assemble, and to petition the Government for a redress of grievances."
-First Amendment to the United States Constitution

Clip from "Challenge to Democracy" (1942)
As stated in the clip, Shinto practices were disallowed in internment camps. This violated the right given in the first clause of the First Amendment, as it prohibits free exercise of the Shinto religion. 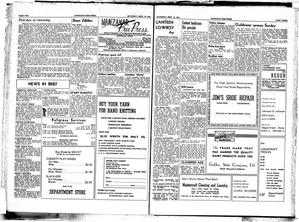 An edition of the Manzanar Free Press, printed September 19, 1942.
Like all other internment camp newspapers, the Manzanar Free Press was printed in English. Use of the Japanese language was prohibited in newspapers and camp meetings. English was required to be the primary language at all public gatherings. Additionally, mass meetings were prohibited for much the same reason -- the Americans were afraid of plots against them.

This was a violation of the first amendment rights that guarantee freedoms of speech, press, and assembly.

"All persons born or naturalized in the United States, and subject to the jurisdiction thereof, are citizens of the United States and of the State wherein they reside. No State shall make or enforce any law which shall deprive any person of life, liberty, or property, without due process of law; nor deny to any person within its jurisdiction the equal protection of the laws."

-Section one, Fourteenth Amendment to the United States Constitution 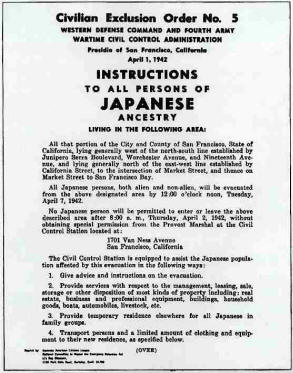 The internment of "all persons of Japanese ancestry" violated the clause that provides equal protection of the laws. The internment camps themselves deprived residents of liberty, as they were rounded by barbed wire fence and heavily guarded and the Japanese lost much of their property and land as they returned home after the camps. This violated the clause stating that no law shall deprive any person of life, liberty, or property.