Background
"Appellant, an American-born person of Japanese ancestry, was convicted in the district court of an offense defined by the Act of March 21, 1942. 56 Stat. 173. The indictment charged him with violation, on March 28, 1942, of a curfew order made applicable to Portland, Oregon, by Public Proclamation No. 3, issued by Lt. General J.L. DeWitt on March 24, 1942. 7 Federal Register 2543." --Supreme Court Opinion, Yasui v. United States

On March 28, 1942, Minoru Yasui intentionally broke the curfew on Japanese-Americans by walking around after 8:00, then turning himself in to the police station. He then challenged the constitutionality of the curfew.

Court Rulings
In a district court, Judge James Alger Fee ruled that only aliens could be held to the curfew. However, he also ruled that Yasui forfeited his citizenship by serving as a Japanese consulate (prior to the bombing of Pearl Harbor). Yasui was sentenced to a year in jail and a fine of $5,000.

Yasui appealed to the Supreme Court. They upheld the decision, but remanded the case back to the District Court. Fee revised his decision, declaring that Yasui was a U.S. citizen and changing his sentence to 15 days.

Result
"The district court ruled that the Act of March 21, 1942, was unconstitutional as applied to American citizens, but held that appellant, by reason of his course of conduct, must be deemed to have renounced his American citizenship." --Supreme Court Opinion, Yasui v. United States 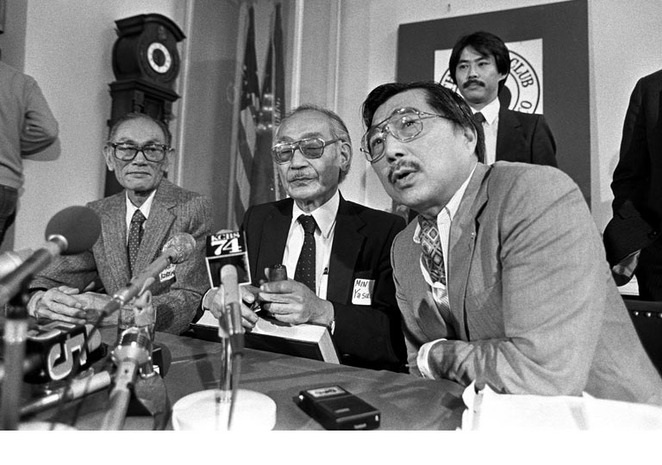 From left to right: Fred Korematsu, Minoru Yasui, and Gordon Hirabayashi at a 1983 press conference